The campaign will raise funds for OzHarvest through Woolworths stores nationwide, with customers encouraged to buy a $2 token and place it on the Christmas Table For Good.

Each donation can be personalised and will be displayed in-store in the run up to Christmas, with the money set to help put two million meals on the table of those in need.

Brad Banducci, Woolworths CEO & MD Woolworths Food Group said; “Through the generosity of our customers last year, over $600,000 was raised from the Christmas campaign for OzHarvest. Our aim this year is to significantly increase this figure.

“For just $2 our customers can help put 4 meals on the table for Australians in need, making a little bit go a long way.”

CEO and Founder of OzHarvest, Ronni Kahn said; “Christmas is very difficult time of year for those struggling to make ends meet. For thousands of families in Australia, Christmas doesn’t mean nourishing meals and an abundance of joy – it means going without. It’s also the busiest time of year for OzHarvest as demand for food far outweighs supply.

“Thanks to our partnership with Woolworths and the generosity of their customers, we can continue our important work and provide an additional two million meals to support people in need.”

The campaign will run from Monday 5th of December until Tuesday 27th December in Woolworths stores nationwide. 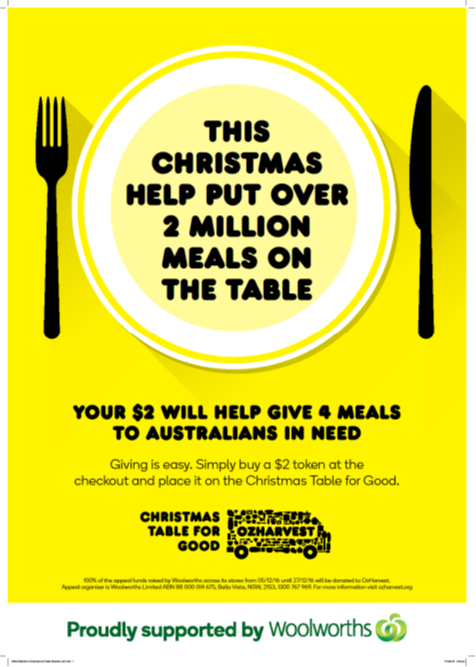